by Jon Weisman
About the Toaster

Baseball Toaster was unplugged on February 4, 2009.

Frozen Toast
Catfish Stew
And So To Fade Away
Fairpole
Baseball Toaster To Be Unplugged, Disassembled For Scraps
Cub Town
Fade to Black
Humbug
My Final Take-It-Or-Leave-It Offer
The Juice
Official Moving Day is Here
Cardboard Gods
Reggie Jackson, 1976
The Griddle
You did a good job, but it's time to go
Dodger Thoughts
Cheers
Bad Altitude
Pitcher News; I Dump My Tickets
Mike's Baseball Rants
The State of the Hall 2009
Bronx Banter
Movin' On
Just a Bit Outside
And We're Off!
Toaster.TV blogs
Western Homes
Screen Jam
Tin Ear
Aesthetics
Search
Archives 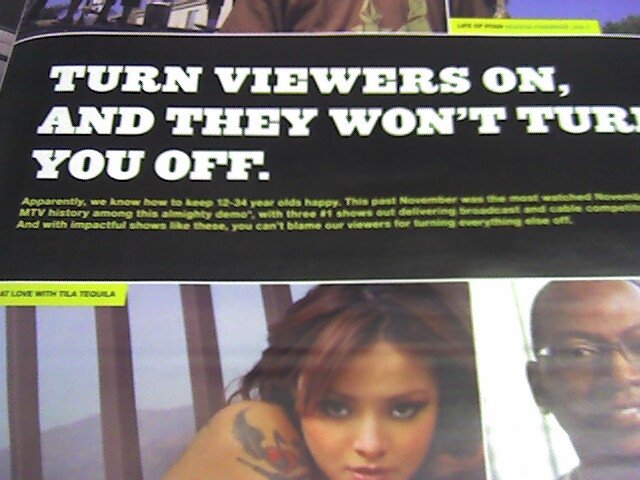 In this ad (excerpt shown), MTV brags about its ability to turn pre-teens on.


Comments
1.   Andrew Shimmin
Gibbons glossed over it, but MTV is what caused the fall of Rome.

2.   ibleedbloo
A bit OT from MTV news to actually discuss watchable TV, but did anyone see the promo for LOST last night. I caught about the last 15 seconds, but quickly found it on YouTube. Its not often I get excited from watching a commercial or even a movie trailer, but season 4 looks like it should be a lot of fun.

I can't wait until January 31. Hopefully the delay between the 8 episodes they have in the can and episode #9 will be short (or nonexistent).

It's been recommended to me by a few people that I give Six Feet Under a try. I've never seen even a minute so I'm not to sure what to expect, but I may be investing 80 hour or so over the next few weeks/months instead of sitting through "The Hills" or "A Shot at Love".

MTV, what have you done to me?
World War III, when are you coming for me?

Comment status: comments have been closed. Baseball Toaster is now out of business.